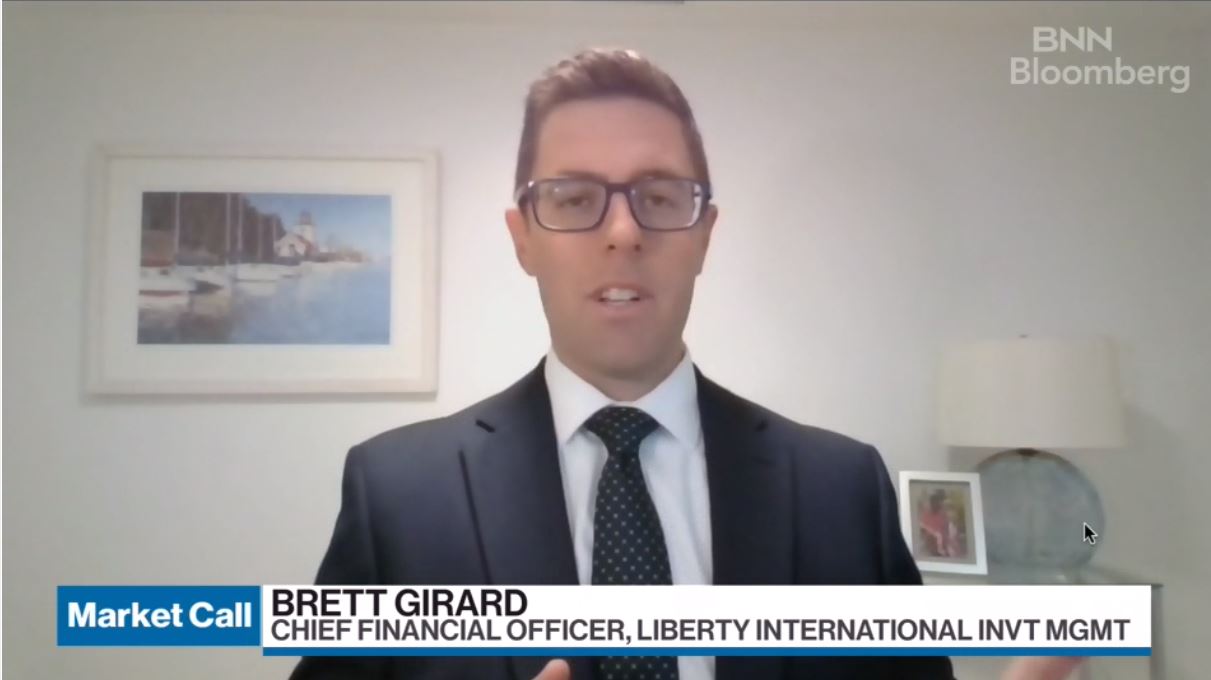 ANDREW BELL: Hi there. Welcome to Market Call. It’s going to Brett Girard of Liberty International Investment Management. He’ll take your questions on global stocks. 1-855-326-6266. Email us: marketcall@bnnbloomberg.ca – Just remember, the topic is Global Stocks Today. Always love that. Takes us around the world, talk about companies sometimes that you never really hear much about. Let’s check in on the markets though, before we get going with Brett Girard.

We have seen southern Nasdaq down a bit earlier. As of this morning, it was down around 5% already in September. Now the Nasdaq in later trading did turn up a bit. We sold up around 13 points. S&P 500 up around 18 points, last time I looked. The TSX 300 rallying a bit as well, around 35 points. So we have seen something of a turnaround in the Nasdaq and a generally positive tone for the other big industries.

We are joined now by Brett Girard of Liberty International. Brett, it’s great to talk to you. Global stocks obviously trading on the mana of—mana from heaven of low-interest rates. A sugar high depending on how you want to look at it. Are we headed for a fall, ultimately? Is this just an artificially inflated market?

BRETT GIRARD: Yeah, thanks for having me back, Andy. So, I think it’s important for us to not just look at today, but let’s look at the whole year, right? Let’s rewind back eight and half months, and if we go back to January, we started off the year quite strong. Between January and the middle of February, we were up about 5%. COVID was something that was happening in China and wasn’t really a North American or European issue. But then from there, it obviously did spread. And that brought the market down by about 35%, and that’s the fastest drop that we’ve seen on record in the shortest amount of time.

But from there, the central government, or the central banks and the governments around the world, they stepped up, and—through a very coordinated fashion with both monetary and fiscal policy—they moved a ton of stimulus into the market. And that brought us from our March 23 lows up 61% to the beginning of September to the beginning of this month.

Now since then, as you sort of said, we’ve started to teeter, and maybe a little bit of wind has come out of our sails. But we’re still, y’know, we’ve fallen 5% since the beginning of September, but if you look over the course of the whole year, we’re up about 7% when we look at the S&P from when we started.

So that’s where we are, but I think it’s important for investors to remember that we’re by no means out of the woods, right? If you think about what’s still in front of us and the headwind we still have to deal with—there’s no vaccine, right? We have a lot of noise and a lot of this and that, but nothing clear in terms of something that people can take to prevent this from happening. And at the same measure, y’know, no real treatment. There’s no clear communication from the governments in terms of what stimulus is going to look like over the long term, in terms of how much and how long, uh, it’s going to last for.

And then politically, you know, more broadly, we have the threat of an election here in Canada. In the US, we have an election that’s now less than 50 days away and is going to be potentially hotly contested. And then, within the stock market, valuations are quite high. Y’know, especially in certain sectors—and I’m sure we’ll get into that today—but then, just to top it all off (as if that wasn’t enough), we’re seeing instances of rampant speculation in certain pockets of the market. So there’s, y’know, as investors out there, you should be happy if you’re even or if you’re up a little bit this year. But like I said, we’re not out of the woods, and the next 6 to 18 months are going to be very critical for preserving capital. That’s really what people at home should have on their minds.

And from our perspective, there’s kind of three things to think about in terms of preserving capital. So one, y’know, forward returns are really a function of what you pay. So if you’re paying and you’re getting in at an all-time high, or you’re getting it in at a high price, that’s going to impact the returns that you can have over a period of time.

The second thing is that I think investors need to try to use time to their advantage. So if you’re in and out of the market trying to day trade, or use options that have a close expiration, time is working against you. If you’re trying to invest in a company and hold that company for a long period of time, then time and compounding are going to work with you.

And the last thing that I would just say is, y’know, it’s great to sort of watch the market go higher and higher. But if things do come off—and we’ve seen volatility throughout this year—if you don’t have cash that you’re sitting on, you can’t take advantage of these opportunities, right? So I would encourage people at home to have some cash on the sidelines so that if we do get a bigger blowup in September or October—y’know, any time in really like I said, the next 6 to 18 months—then they have the funds to take advantage of that. And the other thing with that cash is you should have a wishlist, right? You should think about these are the 5 or 10 companies I wanna buy, and when the price gets attractive, that’s when I’ll buy them. Not today at all-time highs.